All The Transsexuals You Can Eat!

Posted on September 22, 2015 by nathanbiberdorf

Earth is orbiting back into autumn, and though for many people, this signifies the arrival of pumpkin-flavored cheeseburgers and little cartoon ghosts etched into the foam on heir cappuccinos, for me, the word of the hour is shrimp.

Shrimp on an infinite parade into my mouth.

Endless Shrimp is a promotion that blah de bloop ze blurp blop a doo. I’m not a commercial. Let them do their own pitch. I’m just here to tell my gastronomic exploits in pursuit of said shrimpfinity.

Before dropping the bomb on Hiroshrimpa, I decided to look up some shrimpy statistics to try and assuage my guilt. According to the site I found, one shrimp can lay up to 2000 eggs at a time, which made me feel better. I wasn’t committing crustacean genocide, as I’d feared. Even if I ate 100 of them, at worst, it’d be the shrimp equivalent of running over a lone Duggar sibling.

Then I kept reading, and learned how shrimp breed. After hatching, every shrimp is born male. After mating a couple times as a male, it changes to a female to see the mating cycle from the other perspective.

Apparently, all shrimp are transsexual.

My quest was infused with a new layer of dilemma. Before, these creatures had existed on a social strata more or less equal to ‘ocean mosquito’.  But now they all had lives and fears and dreams. Now they had conversations like this:

“Dad, why don’t you and Mom stay in the same kelp bed any more?”

“Well, son, when you get older, there comes a time…listen, you remember your old buddy Arnold?”

“Yeah, we used to hang out all the time.”

“And you remember how he went on a student exchange to the Aegean and never came back?”

“And you remember how that new girl shrimp joined your school the next week, and you really hit it off, and now she’s carrying 2,000 of your many-legged progeny?”

“Dad, what does this have to do with Arnoldine?”

I started to feel very conflicted. Then I remembered that shrimp look like this: 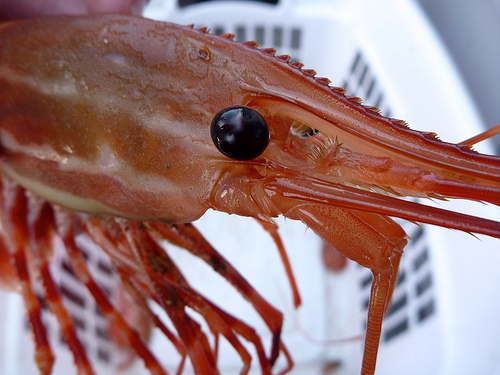 And I felt fine.

Eating endless amounts of anything on your own is just depressing, so I journeyed to Red Lobster with my friend and coworker Josh. After we ordered our first round of shrimp, the first thing to arrive at our table was a basked of cheddar-bay biscuits, which are a trap. A dense, carby not-at-all-shrimp trap.

But they are a delicious, cheesy, buttery trap too. So I ate one. Or five.

Next came the sides. Also a trap. But coleslaw and steamed broccoli are much easier to avoid than the siren-call of cheesy biscuits, so I took a bite or two to be polite and set them to the side, for filling in the cracks later.

I wisely abstained from this Italian poppycock and ordered some properly shrimpish options.

For my first selections, I chose the garlic shrimp scampi and the habañero pineapple coconut shrimp bites. Josh ordered the scampi and hand-breaded fried shrimp.

While waiting, I sipped lightly at my water, which is, of course, another trap. With so many traps and pitfalls, The Endless Shrimp of Red Lobster would probably make an excellent campaign for Dungeons and Dragons.

Within about ten minutes, Noah, our server, brought out the first orders, and asked if we wanted to order the next batch. We thought this sounded wise, and ordered the next sets. We each opted to try the teriyaki shrimp, which he followed up with another scampi, and which I paired with the fried shrimp.

We tallied our respective shrimps. His scampi contained a uniform 10, while mine, in defiance of standardization, held 11. His plate also played host to 15 fried shrimp.

On my other platter there were a 17 of the popcorn-sized coconut-shrimp bites. These were covered with a crispy coconut coating, and swam in a delicious habañero-pineapple sauce. I was worried that the spiciness was intended to work in conjunction with the water-trap to fool me into filling my belly with foolish fluids. But I found that it was a mild spice, just enough to add a zippy counterpoint to the sweet pineapple. The garlic-butter sea that the shrimp scampi came in was likewise delicious.

We’d barely gotten halfway through these orders when the second wave came out.

There were only five shrimp on the teriyaki-skewer, but they were extra-large compared to the others. We got 10 each of the fried shrimp and shrimp scampi.

The fried shrimp was good, but, hey, it’s fried shrimp. I don’t know what you expect me to tell me about it that you don’t know. The teriyaki shrimp was all right, but was probably my least favorite of the four I tried.

And then, without warning, the third wave was upon us.

Four new orders of 10 joined the fray–one order each of fried and scampi. Having been distracted by the secondary invaders, we had yet to finish off even the first shrimp battalions. Now we were beset by no fewer than six separate armies apiece. Tolkien would have slunk off in shame at the sight of our battlefield.

Seeing that we had entered the combat in earnest, our dungeon-master (the name I was now using to refer to our server) had decided to swarm us with an overwhelming flood of minions. I was forced to expend a daily power: The Quadra-Shrimp Death Skewer.

This ability involved skewering one of each kind of shrimp, thus decimating the battlefield and robbing each shrimp family of its power. We mopped up the remaining stragglers and readied for the next wave.

I convinced Josh to try the habañero bites, and it was nearly his undoing. He was not a fan. Fortunately, his order was smaller than mine, so I took the brunt of this wave, eating 21 to his 14. And it seemed like we were almost out of the woods…

That was when the ground started to quiver…

From around the corner of the dungeon came…

Another order of shrimp scampi each!

Yeah, I know, we already handled a bunch of those earlier…but that was when we were still fresh for battle. Now we were laden down with spoils, and these final shrimp loomed large and terrifying.

And yet we soldiered on.

Shrimp after shrimp fell beneath our…um, teeth? (The DnD metaphor only goes so far.)

At last, the final shrimps lay before us.

“FINISH HIM!” screamed Josh, or perhaps it was, “FINISH (S)H(R)IM(P)!” In the heat of battle, it was impossible to know for sure. And with that, the battle was finished.

179 shrimp in all. Not too shabby, but also unlikely to send a shrimpine mother-father into inconsolable grief.

And so we waddled victoriously from the Red Lobster, leaving a trail of severed tails in our wake.

This entry was posted in Food, Humor and tagged Food, Humor, Restaurant, Shrimp. Bookmark the permalink.

1 Response to All The Transsexuals You Can Eat!